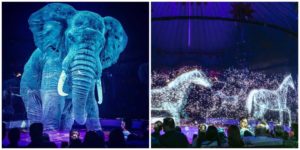 Entertaining the crowds since 1976, Circus Roncalli has done something unimaginable – they have swapped out horses, lions and elephants for holograms. And the show remains spectacular.

The shows still feature tusks, tails and an array of acrobats and fiery circles, but in a world’s first, not a single animal is real. They recreated the magnificent 3D holographic imagery with projectors which fill an arena measuring 32 meters (105 feet) wide and 5 meters (16 feet) deep with a view of 360°, for the entire audience to enjoy.

TAG/TRAUM, Roncalli’s agency has joined forces with Bluebox who has partnered with Optoma who have installed 11 ZU850 laser projectors throughout the arena, providing for a mesmerizing experience. It’s important to understand that the Idea and Concept was from Bernhard Paul the Founder and Director of Roncalli.

Birger Wunderlich at Bluebox said, “We have been using Optoma projectors for 6 years and have consistently had a very positive experience in price, performance, and reliability. We needed a high contrast projector with great colors for the 3D effect and the ZU850’s 2,000,000:1 contrast is perfect for this project.”

Their bold moves comes at a time where animal living conditions in captivity are under dire concern.

Bernhard Paul the Founder and Director of Circus-Theater Roncalli

Horses and dogs were part of your shows for many years.Don’t you miss them ?
Times changed also Opinions change. Transporting animals on congested/full highways is an anachronism and not necessary. In Begin of 2016 I had the wish to show animals in the circus in a poetic and modern way. Together with „La Fiesta Escenica“ from Spain I did show already different animals as puppets and costumes. For example Polarbears. I saw the Superbowl from America. And Justin Timberlake was singing with Prince. But he did pass away. I was so impressed from the holographic technic. So I wanted to have It round. In  Begin 2017 I hired a new CDO (Chief Digital Officer). Markus Strobl became the CDO and CCO (Chief Communication officer). He did lead now on together with me the Project. In March 2018 was the Premier of the 300° Holographie in the Circus. It was the Premierday of the new Tourshow „Storyteller“ in Cologne in Germany.

Why did you actually decide to stop with real Animals?

Roncalli’s Focus from the beginning was on Clowns , acrobats and poets acts. More the 30 Years just horse was used on the show. But in the last years Roncalli did change his Routing Concept to play only at Metropole-City in Germany and Europe. We just visit cities where we have special places like at Vienna where we play at the Town Hall Square. There is no space anymore for animals and not really green fields. In the past  we did already play at Moskau, Amsterdam and Sevilla. So new cities in Europe are of course possible in the future. It is important that we get a special and central place/spot. Many cities want invite us. This year we are touring in Germany. For example in Hamburg or Munich.

As a circus you have to be open minded for everything especially for the feelings of the audience. Cause the Audience is our boss. When you feel that the audience does not approve of something then you have to change it. After my first hologram experience on a Roncalli-Cruiseship Show for TUI I had the wish to make something new also at the Circus.

What were the reactions of the audience?

After the announcement not to use any animals at our shows we received more then 20.000 Emails and letters from all over the world. 95% positive feedback. When we started with our 300° Holographie the pictures and videos did go viral in Social Media. At More then 40 countries it was a News in the Media that Roncalli is the first circus to use holographic animals. In one year our show „Storyteller“ hat more then 600.000 visitors.

Were you scared that people got disappointed, not to see animals « for real » ?

Like I said the focus of Roncalli never has been on Animals. In 2018 we did ask our visitors: What do you expect of a Roncalli-Show? Here the Ranking:
1. Clowns
2. Acrobats
3. Poetic acts
4. Nostalgic and historic circus wagons
5. Good Live Music
6. Horses (2,7 %)

As a Circus or Circus-Director you have to listen to the audience but also to your heart and to trust you own gut. I was sure and focused to show the audience something new.

What do you think of the cities and even countries that decide to prohibit shows with animals ?

It depends on the situation. You can’t compare every circus. Each is different. So better to decide by situation and not in general. What should not be critical is populism.

How did the other circus react when they saw your new way of Circus?

Especially Circuses with the focus Animals Acts was not really happy about. But since las year I did call my Circus not anymore just Circus I call it now Circus-Theater Roncalli. Because we were and are now also more close with Theaters.

Your holograms shows are kind of « sober », « animals » seem to stay in the middle. What do you imagine for the future : could they end up jumping in the audience, for example ?
We continue to work on the holography. So far, we were pioneers. We still have many ideas. We also changed a lot of outside the ring. We are the first circus that is going to be free of plastic. For example, our popcorn is only sold in paper bags instead of plastic bags. In addition , we now also offer vegan and vegetarian food.
Can you tell us what are the big changes in your everyday organization, with this new shows ?

Even the modern technology is quite intense in the care. Again, there may be technical problems. But so far everything works very well.

Does it also mean lots of money saving ?
Money was not the engine and the purpose of this change to use Holography.
Bernhard Paul the Founder and Director of Circus-Theater Roncalli
Activists have accused many circuses of severe cruelty such as beating, starving and keeping their performing animals under the most unsanitary conditions, being forced to perform for massive crowds night on night on very tight schedules.
A great example of the movement being made, the UK government has been presented with a legislation that would ban all travelling circuses from utilizing wild animals from the year 2020 on wards – a victory in its own.
Quelle:

All Pictures are the ownership of Circus Roncalli

Dog Sees Owner Doing Pull-Ups And Decides To ‘Save’ Her ift.tt/2Dwiztu

Puppy Shows Up On Family’s Porch And Refuses To Leave ift.tt/2PyuV6C

Dog Is So Proud She Learned To ‘Paw’ She Won’t Stop Doing It ift.tt/3a84NJf

Guy Tries To Take His Cats For A Walk — And It Doesn’t Go As Planned ift.tt/3a42erI

Cat Comforts His Buddy During Thunderstorm

Dog Sees Owner Doing Pull-Ups And Decides To ‘Save’ Her

Puppy Shows Up On Family’s Porch And Refuses To Leave